Nothing quite as fun as breaking in a new pair of trail shoes in the woods during a surprise hailstorm.

I’d been working on a thesis all day and the skies had been overcast, so when the sun broke through all of a sudden and the sky was all clear blue optimism, I did not hesitate. I put on my new lovely then-shiny Salomon Sense Pros with new foot orthotics, grabbed the Salomon Park Hydro Handheld with a few things and headed out to the nearby woods for a run.

The forest was wet and muddy but fun, the sun shining through the trees a welcome respite from the recent rains.

I fiddled about with the Handheld and the pocket in my tights for way too long before everything found its proper place. I reckon when we runners first get the idea to run at any given time, we always think we can go nearly empty-handed, thinking “I dun’t need no nothin but the shoes on mah feet yo”, but there are utimately always those few little things that will be nice to have on the way…

This time, I brought along a dried fruit bar, 400 ml of water, for once my cellphone with headphones for photos and music, keys and lotsa runny nose tissues. I was happy to be out and highly motivated, planning to go for a much needed long run! Fantasizing about 20 km long runs, the 31 km Hermannslauf race in April and thinking about whatever runners think about when running, I jogged along the trails at a medium pace. Luckily transportation with the Handheld works well enough although I stuffed a little much into it. But ah I was in for a surprise.

About 5 km into the run, finally having found a comfortable flow-y rhythm, the sky suddenly turns gloomy and I frown at it. I have a moment to think, “ah, maybe now’s a good idea to put on my jacket just in case it’s going to rain a bit, don’t want to ruin that cellphone”. Just as I pull up the zipper, all hell breaks loose around me and the sky thrusts hard little balls of ice at the forest with a wind speed a waterfront town would be proud of. Not the biggest hailstones ever, but thrown brutally enough to warrant a jacketed hand over the face for some protection.

At 2°C and with rain mixing in and soaking my tights, that was it for the planned long run and I started heading back into the general direction of my starting point. Turns out it’s weirdly posture-breaking to keep a hand raised to the level of one’s forehead, but it’s also great fun to run crazy fast in crazy weather when you know home and warmth is not too far.

In case you wonder why there are no photos of all that, my cellphone battery had somehow decided that then would be a good time to lurch down to 5% and refuse to take any more pictures. So I had to live to tell the tale.

But damn, I did feel like a hero as I hasted over the forest ground turned icy white.

And sure enough with the moody weather, a mere kilometre before I reached my home halls, the hail stopped, the sun broke through again and the sky beamed at me like nothing happened.

Ah, but I was happy! I had been on an adventure! 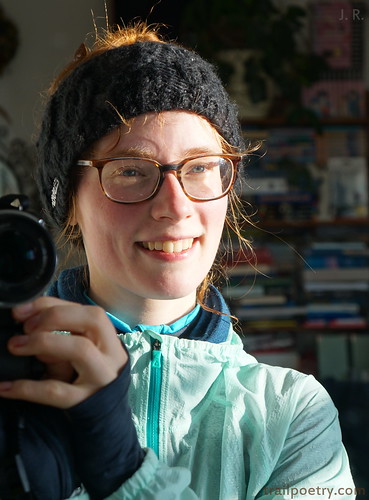 Check out this move on my movescount: